Medgold said it “remains committed” to advancing the Tlamino Project in parallel with activities at Zlogosh.

Medgold Resources Corp (CVE:MED) (OTCMKTS:MGLDF), a gold exploration company targeting early-stage properties in the Balkan region, said Monday that it inked a letter of agreement with privately-held Gecon EOOD for an exploration license application made by it for the Zlogosh property, in Kyustendil Oblast, western Bulgaria.

In a statement, Medgold said that the main mineralized targets at Zlogosh are situated approximately 40 kilometers by road from Medgold's Tlamino project in Serbia, with which they appear to “share considerable geological similarity.” 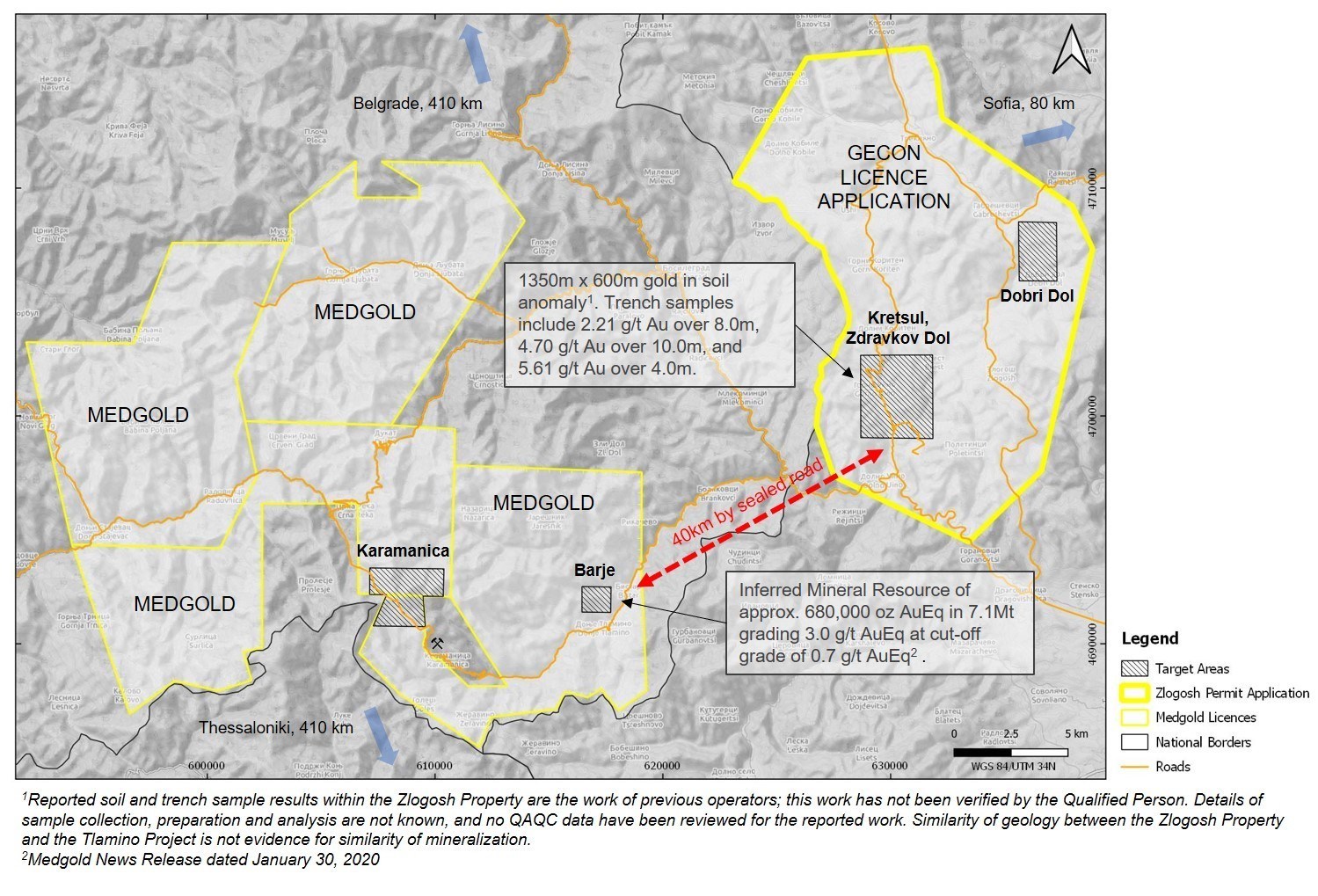 After due diligence, Medgold is planning drilling and other exploration activities at Zlogosh targeting a mineral resource of a similar order – or greater – than that seen at the Tlamino project, it said. Extensive historical datasets of stream sediment, soil and rock samples are available for Zlogosh, and Medgold intends to apply its understanding gained in similar exploration at Tlamino to these highly prospective targets. Medgold said it “remains committed” to advancing the Tlamino Project in parallel with activities at Zlogosh.

Under the terms of the agreement, Medgold has the right to complete due diligence activities at Zlogosh which, if satisfactory, give Medgold the right to enter into an option agreement with Gecon EOOD. The option agreement will allow Medgold to earn an initial 51% interest in Gecon EOOD by financing nearly €330,000 (US$358,198) in permitting and permitting-related expenditures, followed by a second option to earn a further 44% interest in Gecon EOOD by incurring approximately €650,000 (US$705,542) in exploration expenditures.

Medgold’s Tlamino project covers around 200 square kilometers in southern Serbia and is held by Medgold under two exploration licenses - Donje Tlamino and Surlica-Dukat. It has reached a milestone at its Tlamino project in Serbia, with the publication of a maiden resource for the Barje prospect there. Medgold, via its joint venture with Fortuna Silver Mines Inc (NYSE:FSM) (TSE:FVI), carried out exploration and then diamond drilling at Barje in 2018 and 2019, successfully encountering gold mineralization in a shallowly inclined body of breccia.

Tempus Resources to pick-up pace of drilling at...

Sativa Wellness Group salute EU court ruling that CBD is not classified as...

Sativa Wellness Group Inc's (LON:SWEL) Henry Lees-Buckley talks to Proactive London about the latest ruling from the European Court of Justice (ECJ) that CBD is not classified as a narcotic drug and that a French ban on hemp derived CBD contradicts EU law. Lees-Buckley says because they...

Mining BTU Metals drilling program on track as they look at the SW-NE...