District Metals Corp (CVE:DMX) is getting back into the field at the highly prospective polymetallic Tomtebo project in Sweden.

The Vancouver-based company said Wednesday that field work has begun on the property, starting with geological mapping, prospecting and geochemical sampling near the former Tomtebo Mine and expanding throughout the 5,144-hectare property.

The concurrent programs are designed to complement a recently completed SkyTEM survey ahead of a planned drill campaign in early 2021, the company said, noting that the property has never seen modern systemic exploration. 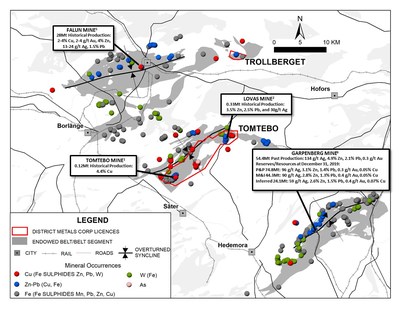 "Compilation of historical drill results at the Tomtebo Mine is complete, and Leapfrog 3D modeling of the mineralized zones continues, which will be greatly enhanced by the additional data obtained from the recently commenced fieldwork,” District CEO Garrett Ainsworth told shareholders in a statement.

“The final SkyTEM data will be available very soon, and thereafter interpretations on the magnetic and conductive data will be developed as an additional layer to define our priority drill targets at the Tomtebo Mine and regionally across the Tomtebo Property.”

Ainsworth called Allen an “authority” in the Bergslagen mining district, adding that his presence is significant given his key role in the discovery of polymetallic mineral resources at the world-class Garpenberg Mine.

Tomtebo is comprised of two historic polymetallic mines and numerous polymetallic showings on the property along an approximate 17 km trend that exhibits similar geology and mineralization as other significant mines within the district.