The firm holds a 1% NSR on the Nevada property, which is owned by AngloGold Ashanti

New drill results from claims adjacent to the southern border include 71.6m grading 1.8 g/t gold from 192

Orogen Royalties Inc (CVE:OGN) said Tuesday that exploration work near the Silicon project in Nevada uncovered high-grade intervals that could have “meaningful implications” for Orogen’s 1% net smelter return royalty on the property.

New drill results by Coeur Mining Inc (NYSE:CDE) and Corvus Gold Inc (TSE:KOR) on claims that buttress the southern border of the project suggest “significant” expansion potential of Silicon, which is owned by AngloGold Ashanti NA.

"These results are exciting and have potentially meaningful implications for Orogen's royalty on the Silicon project,” Orogen CEO Paddy Nicol said in a statement.

“The drill holes are located approximately 1,500 metres from the southern extent of AngloGold's drilling on the main Silicon area. The intervening Silicon ground, which has yet to be drill-tested, holds potential for similar oxide gold intercepts." 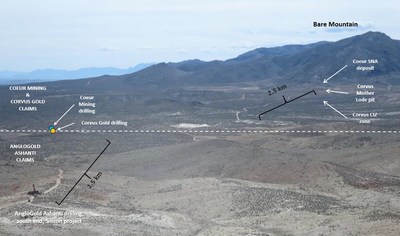 Silicon is an epithermal gold system that covers a large area in the Bare Mountain district of Nevada. AngloGold has drilled 47 holes totaling approximately 19,000 metres and has permitted an additional 155 acres of surface disturbance, including 109 approved drill sites in their Phase 1 program.

Orogen also holds a 2% royalty on the Ermitaño West gold-silver deposit in Sonora, Mexico, owned by First Majestic Corp, and eight early-stage royalty assets in Mexico, Nevada, and Argentina and a broad portfolio of exploration projects in Canada, USA, and Mexico.

Orogen Royalties eyeing more organic royalty growth in 2021 as it...