District Metals Corp (CVE:DMX) revealed the results of its Leapfrog 3D modeling of mineralized zones at the Tomtebo property in Sweden on Wednesday, setting the basis for an upcoming drill program.

The modeling outlined 33 polymetallic mineralized areas within four zones based on drill assays and historical drill holes, the company said in a statement.

District said it will use the model to prioritize targets for a planned drill program at the historically producing property in early 2021. 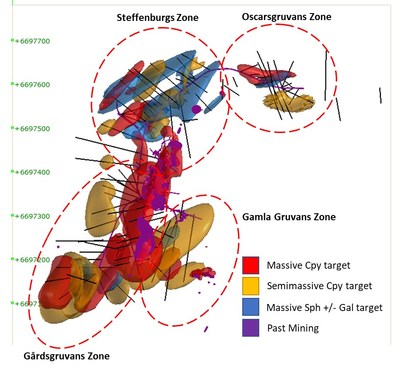 Also, the modeled mineralized zones at the Oscarsgruvans and Steffenburgs zones support drilling at 50m centres that have the potential to develop an NI 43-101 resource, the company said in a statement.

"The Leapfrog 3D modeling of polymetallic mineralization at the former Tomtebo Mine has confirmed priority drill targets, and has set our course towards potentially developing a mineral resource through confirmation, infill, and step-out drilling,” District CEO Garrett Ainsworth said in a statement.

The data will be essential in targeting mineralization below the 200m level exploration drift where polymetallic ore is currently productively mined at depths of 1,400m at the Garpenberg Mine by Boliden, and 1,300m at the Zinkgruvan Mine by Lundin Mining, Ainsworth told shareholders.

“In conjunction with our recent geological work and SkyTEM conductive and magnetic anomalies at the Tomtebo Mine, the drill targets and subsequent potential are nothing short of incredible,” the CEO added.

Also in Wednesday’s statement, District said it had appointed mining engineer Jonathan Challis to its board of directors, replacing Anna Ladd-Kruger, who will continue as a strategic advisor to the company.

Challis has over 30 years of experience working on mining projects around the world. In addition to his engineering background, the new board member has worked on the capital markets side as a mining analyst with companies like CM Oliver.

District granted Challis 300,000 stock options priced at C$0.33 per share for a five-year term under the firm’s stock option plan.