The company is currently submitting applications for trenching and drilling permits

GGX Gold Corp (CVE:GGX) (OTCQB:GGXXF) said Wednesday that it had received assay results of up to 23.5 grams per ton gold from its Gold Drop property in British Columbia.

The northern-trending vein is nearly parallel to the bedding and foliation planes of the host rocks and consists of quartz banded with host rock, according to GGX. Its width ranges from a few centimetres in some areas and up to three metres in others, extending along strike and down dip.

Historic development in the area consists of open pit cuts, pits, shafts and a small amount of drifting, according to GGX. 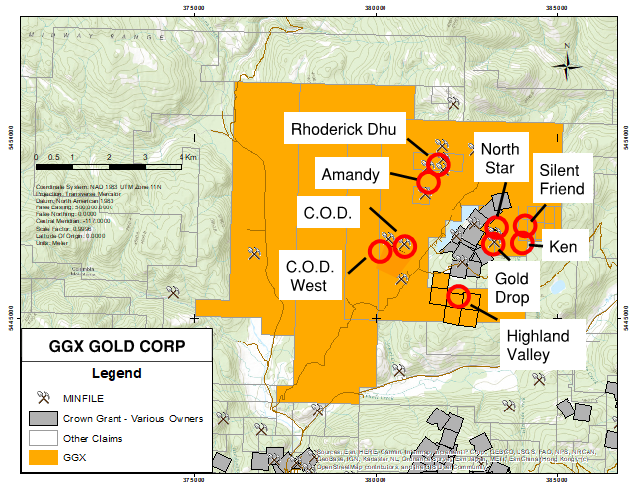 In total, GGX received results from three prospecting samples on the Mt Rhoderick Dhu area of the property, which is north of the high-grade, near surface COD vein.

In a statement, the Vancouver-based company called the exploration program at Amandy is “extremely encouraging.”

GGX added it is currently submitting applications for trenching and drilling permits and drafting plans to start work immediately once permits are received.

Gold Drop property was mined intermittently from 1919 to the 1980s. Historical production amounted to 7,572 tonnes at an average grade of 5.2 g/t of gold and 93.4 g/t of silver, with the majority of production coming before 1942.