The Vancouver-based company focused on battery metals and materials said its low-cost, metallurgical-grade silicon particles of micron-size were able to sustain its original specific capacity of 3,000 milliampere hours per gram (mAh/g) without major capacity loss or performance degradation in the cell.

A sulfide-based solid-state electrolyte, argyrodite, was utilized with a 100% loading of NEO's silicon microparticle anode materials. The battery test was conducted and validated by a South Korean third-party laboratory.

Metallurgical-grade silicon microparticles are the most promising candidate for next-generation silicon anode materials in electric vehicle and energy storage applications due to the cost-savings that can effectively drive down battery costs (in dollars-per-kilowatt-hour), said the company. On average, the microparticles are 8 to 10 times less expensive than the same nanoparticles. However, its poor performance from the volume expansion issue stands as a substantial hurdle for commercialization.

"NEO, hence, is focusing on the performance improvement of metallurgical-grade silicon microparticles through the company's proprietary nanocoating technology. Implementing silicon microparticles into the anode material will be a complete game-changer for the lithium-ion battery industry,” said JH Park, who is the director and chief scientific advisor at NEO.

“As released previously, NEO enabled a six-minute ultra-fast charging with the microparticles, and today, we are more than excited to announce that the low-cost Si anode made by NEO's modification can exhibit substantial cycling performance in argyrodite-based all solid-state electrolytes." 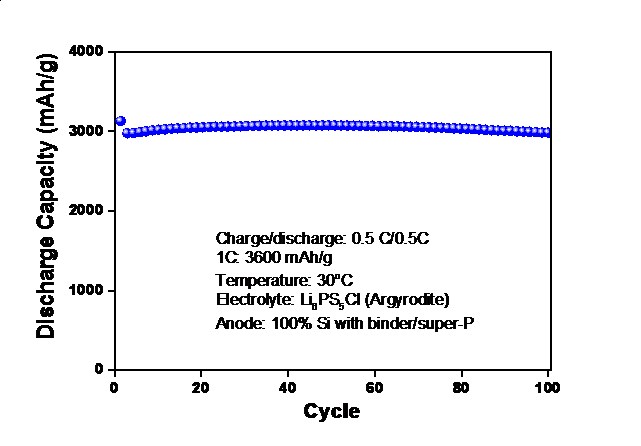 The company said that solid electrolytes play a key role to enable superior safety reliability and high performance for all-solid-state lithium batteries. Among the diverse selection of solid electrolytes, argyrodites represent a relatively new and promising class of sulfide-based lithium-ion superconductors due to their high ionic conductivity at room temperature, low-cost and good compatibility with lithium (Li), noted the firm.

Li argyrodite solid-state electrolytes are a vital component to develop high-performance all-solid-state batteries, and numerous players in the battery supply chain are attempting to commercialize this product.

NEO CEO Spencer Huh noted that the first phase of NEO's silicon anode materials will be applicable for general liquid-type conventional lithium-ion batteries for EVs, but its unique nanocoating solution for the production of low-cost and high-performance Si anodes will concurrently accelerate the commercialization timeline of all-solid-state batteries.

“Under the NDAs with established and reputable solid-state battery developers, NEO will continue to expand our collaboration through moving forward with the testing of NEO's micron-sized silicon anodes, and we expect to enter the battery supply chain through diversified routes,” said Huh. “Additionally, with the semi-commercial facility, the mass production of NEO's silicon anodes is approaching near."

NEO Battery Materials breaking through the barriers with its silicon...

NEO Battery Materials says it has completed assessment of...

NEO Battery Materials signs a site due diligence contract for its...